Hello Koalas is possibly the most enjoyable project I have worked on, which is saying something in a career that spans over 45 years in the arts, marketing communications and event management.

Career highlights have included managing art galleries, publishing arts and tourism magazines, curating art collections, working as a creative director in advertising agencies, across television, radio and print; and establishing an international reputation in the field of arts, health and creative ageing and founding in 2009 the leading annual international conference in this field.

A longtime advocate of public art to foster cultural tourism and community cultural development, I found the opportunity to create a public sculpture project when I moved to Port Macquarie from Sydney.

My arts and health colleague in the UK, Elaine Burke introduced me to the public sculpture project Larkin with Toads in mid 2011, and I knew straight away that this was a project that would translate well to my new home, with the iconic koala, so beloved in the area, at its heart.

Two years of research and product development followed and in December 2012, with Port Macquarie Hastings Council on board as Principal Sponsor, and the Koala Hospital as Principal Project Partner, we launched the project as a signature cultural event for the region, with cultural tourism as the key objective.

In September 2014, the Hello Koalas Public Sculpture Trail was officially unveiled by the Hon Mike Baird MP, Premier of NSW at a special preview of all 50 sculptures at Emerald Downs Golf Course in Port Macquarie. attended by about 200 people including the artists, representatives of sponsors, project partners and media.

This project is fun, creative and quirky. But its potential is so much more. Hello Koalas is inclusive. It directly connects to so many community groups and business organisations from a diverse range of industry sectors, and also provides an avenue to achieve a number of important objectives.

These include: the desire to grow and nurture a healthy, connected and inclusive community; self expression and focus on the creative industries and the potential of public art in our region; the value of the arts in relation to health and wellbeing, and then the more obvious social and economic impacts that Trail is having on our region from a tourism perspective since its launch in September 2014. (Linda Hall, 2015)

Denis Mamo has enjoyed an award-winning career as creative director in agencies such as Ogilvy, Publicis Mojo and BWM, and as a partner and director of UrsaClemenger.

Denis has over 100 awards at shows including Mobius, Cannes, Clio, New York Festivals, D&AD, One Show, Globals, Effies and London International. He has served as Chairman of Judges for the Australian Writers and Art Director Awards (AWARD), was inaugural judge for Cannes Lions Health in 2014 and was first to win ‘The Pitch’ twice on The Gruen Transfer.

Denis is honoured to serve on the advisory board of the the Australian Centre for Arts and Health and Reg-Tech start-up, ID Exchange.

Ben V Walsh is a Melbourne-based artist and the creator of the 3D Hello Koalas model. He works in diverse media including traditional art practice (painting and sculpture), digital and new media.

Ben likes to work cross platform combining digital 3D and new media with traditional art, using the knowledge and experience he has picked up working in the computer games industry in conjunction with his traditional art practice of painting and sculpture. The visual excitement of fusing these two mediums is what interests and gives Ben inspiration.

A strong believer in the protection of native animals, Ben was excited to be part of this project and ‘give the voiceless a voice’.

Mitch has been a resident of Port Macquarie for more than 30 years and is principal of Port Macquarie Hastings Heritage a local heritage consultancy practice. Through his work he strives to achieve a balance between preservation and change.

The Hello Koalas project is innovative and quirky. The thought of koalas having lost most of their natural environment, due to the pressures of development, now going wild, reclaiming their territory and appearing on a street corner or in other unexpected locations near you appeals to my sense of humour – as I’m sure it will to locals and visitors alike. 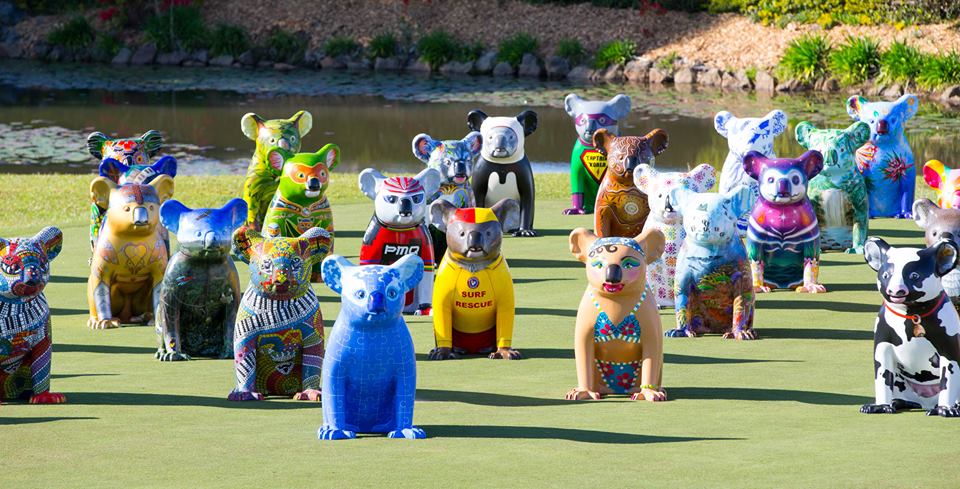 Following a successful photographic and journalism career in Sydney for nearly two decades, Lindsay Moller and his young family moved to Port Macquarie in early 2014.  Soon after, Lindsay joined the Hello Koalas Team and has professionally photographed and documented all the Hello Koalas sculptures and associated events.
Lindsay’s high-quality images have been used in developing the Hello Koalas gift range.

Wayne Staples has become an invaluable member of the Hello Koalas team, overseeing the Hello Koalas sculptures as they move around to various events and new locations and maintaining them in pristine condition, including new plinths and plaques.